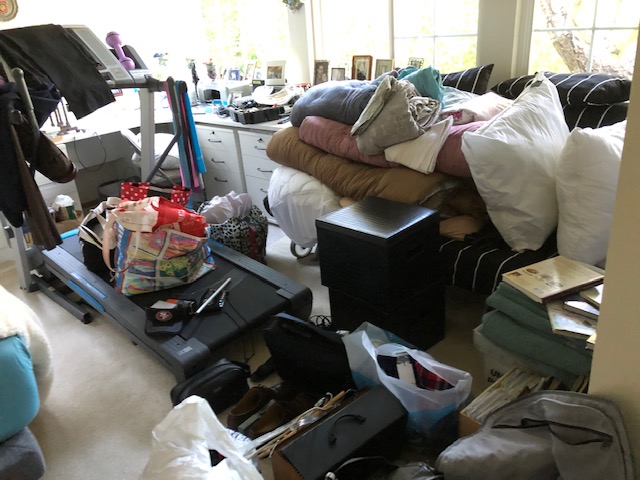 Dan and Donna (not their real names) are an early-middle aged couple living with two young children in Southern California. When Dan’s mother — who was living in the Bay Area — died unexpectedly, the couple was faced with clearing out her home.

Last month, we talked about all the ways Dan was in Denial about the downsizing process. This month, we’ll follow Dan and Donna as they face the next stage: Anger.
_______________
Donna was the one who called me to ask for help. It didn’t take  long for me to realize that while Dan was still deep in denial about the effort and energy it would take to go through his mother’s things, Donna was already feeling angry about it.

“He thinks we can do it ourselves. I can’t do it. Who’s going to take care of the kids?” she said, the exhaustion evident in her voice. “We just got through decluttering our place. I really don’t want to fill up the house with my mother-in-law’s stuff now!”

“I hear you,” I reassured her. “We’ll take care of everything.”

Donna’s feelings about the situation were clear, which made decision-making and asking for help easy for her.

Meanwhile Dan, an only child, was still coming to terms with his new reality.

“Why do I have to do this?” Dan yelled, his frustration mounting as he sorted through the mountain of clothes, blankets, books and papers piled on the sofa. “Why isn’t Donna here? What am I supposed to do with all of this stuff?”
_______________
Downsizing is fundamentally a long process of negotiating – with yourself. If you’re not clear about your motivation or intention, frustration builds quickly. And progress is slow.

Dan was not only managing his feelings around his mom’s passing, but was clearly overwhelmed by having to make decisions about his mom’s stuff by himself. Dan couldn’t name those feelings. He just knew he was really angry.

I let him vent most of the afternoon, and then asked him:
Do you want to run this project? Or will you let it run you?
_______________
While he was caught in a situation that was clearly not of his choosing, Dan didn’t have to be a victim.

I suggested that by creating a plan and a schedule (which I’d help him do); identifying which decisions he could delegate to me; and telling his wife what kind of emotional support he could use from her, he could make progress with a lot less pain.

Maybe what I said made sense to him; or maybe he was just too tired to keep resisting. Whatever helped him see things differently, the next time Dan was back in the Bay Area, his energy and attitude had clearly shifted. He was calmer. Clearer. And he was accepting my suggestions.

“I had a long talk with Donna when I got home,” he told me. “We decided we’re going to put you in charge.”

And it was…while it lasted.

NEXT:  Bargaining… what happens when no one wants what you have to sell?