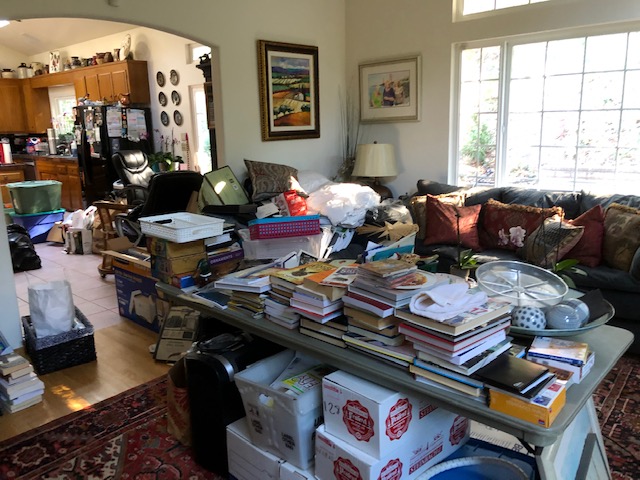 Over the next few newsletters, we’ll follow a real couple as they negotiate these stages going through the downsizing process.
______
The call came through just after Thanksgiving:
“I got your name from our realtor. My husband’s mother passed away unexpectedly two months ago. We really need help cleaning out her house.”

“I’m so sorry. How’s your husband doing?” I asked.

“Dealing with the unexpected death of a parent is hard enough,” I told her. “When you’ve also got to clean out their house, it’s easy to go into major denial and just push away the whole thing.”

“He thought we could do it ourselves, but there’s no way,” she said. “We’ve already spent a week there, and we haven’t begun to make a dent. We’re in Los Angeles. His mom’s house is in the Bay Area. We both work and we have two little kids. I can’t deal with going back. And I don’t want her stuff! He doesn’t know I called you. I don’t know what else to do.”

“It’s OK,” I told her. “I can help you. And you did the right thing.”
_______
Denial is the first stage in the process of grief. It’s also the first stage that many downsizers go through, whether they’re downsizing under duress, or not.

First, there is the denial that one has the responsibility to downsize at all. That’s what put this couple, I’ll call them Dan and Donna, in the position of having to clear out his mom’s home in the first place. Had Dan’s mom taken responsibility for paring down a lifetime’s collection of stuff, her son would have been able to spend this time mourning her passing – not clearing out her house.

If you think letting go of your things is too hard for you to do, just remember that it will be many times more difficult for someone else to take on after you’re gone.

Second, there is the denial regarding the amount of time and planning downsizing takes. Many people think that downsizing is just a matter of jumping in and getting it done. But proceeding without a plan, which Dan was beginning to do, only creates confusion and chaos.

Third, there is the denial of what’s really important. Downsizing brings up all sorts of emotions. (Even more so when those things are what remains after a person is gone.) The challenge for most downsizers is to decide which items have real personal value to you, keep those things, and let go of the rest.

Since the majority of Dan’s mom’s “stuff” was purchased after he left home, he didn’t have a emotional attachment to most her things. He was attached to getting good prices for his mom’s extensive store of china, oriental rugs and original art.
_______
I reassured Donna that I could create a plan and process that would keep Dan on track without her needing to be involved. The only catch — she’d have to convince him first.

When Donna told Dan about her conversation with me, he initially insisted that he (they) could do it on his (their) own. But when she made clear that, given their kids’ school and sports schedules, she didn’t have the time, energy or emotional reserve to be his partner in this process, he acknowledged he couldn’t do it alone. Ultimately, he agreed to having me help.

A week later he drove up to the Bay Area from LA, and we got the process started. Dan had just taken his first step out of denial. But that was just the beginning…

NEXT: Dealing with disappointment when things don’t go as planned.