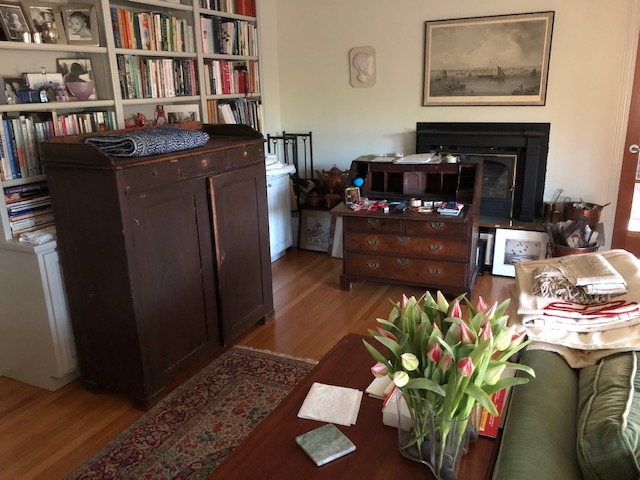 When my mother in law died at the age of 97, my husband and his three siblings were faced with cleaning out the East-coast home where she had lived for more than 60 years.

Last month, I talked about the challenges in getting the siblings to agree how to get the house sorted out, packed up and ready to sell – with a target date just a month away.

By the end of Part 1, everyone had agreed on how they’d do it. Here’s what actually happened.

Sorting it out
I assigned each of the four siblings a part of the house to sort through and organize into categories so everyone could see what was hidden in closets, cabinets, and drawers. I gave them a color and a corresponding package of sticky dots to use in identifying things they were interested in keeping.

“One dot on something means it’s yours. Two dots means we’ll talk about it,” I said.

“And then what?” one asked.

I wouldn’t have imagined it was possible, but the sorting process went surprisingly smoothly. Everyone knew was they needed to do. They stayed focused, kept out of each other’s way and got the job done.

I had actually expected most things would go unclaimed and that we would be able to identify a lot of stuff we could move out quickly. Instead, only a very few things were left dot-free.

Even so, we were able to sort through and organize items on the first floor, the second floor and the attic in three sessions. (Three 10-hour long sessions, but still…)

One suggestion I made was critical in saving time and keeping the project on track:  There would be no going through any memorabilia. Anything related to family history — photos, letters, etc -– would get boxed and taken to the summer house in Maine, where it could be viewed at leisure. I was expecting push-back on that one, but amazingly, everyone agreed.

After everything was sorted through, there were (thankfully) only a handful of items that were in contention.

“Now what? How do we decide who gets what?” they asked.

I suggested each of them give me a “Most Wanted” list, ranking things in order of importance. I nominated myself arbitrator to decide who would get what. In the end, no one got everything they wanted, but everybody got something. And everyone seemed to be OK with the way it went.

Letting it go
We were making great progress but there was still a lot to do before we got everything where it needed to go.

I gave each person an area of operations to manage. One person was Sales Coordinator, dealing with the auction house. Another was Manager of Charitable Donations. We also had the Trash Master who had to manage dumpster space, and the Move Coordinator who interfaced with the realtor. Each sibling found a way to do their part the way it worked best for them.

I might have done a few things differently, but I didn’t want to overstep my bounds. Plus, I had to do something I would never do in my professional life: I had to leave in the middle of the job. It was time for me to go back to California.

By this time they realized that they actually did need a Senior Move Manager’s help, so I found a colleague in the area. After I left she stepped in to guide them through the packing, and then choosing and working with the movers.

Everything was going swimmingly, and on schedule.

And then…
In downsizing, the only thing you can expect is the unexpected. In this case, the unexpected came in the form of a sewer inspection. The septic tank for the 100-year-old house didn’t pass muster. The choices were to either get a new septic tank or hook up the house to the town’s public sewer line.

Hooking up the house was a set-back, but a manageable one. Less than two months after we started, the house was staged and put up for sale. On August 23rd the realtor sent us the announcement.

“I can’t believe we got it all done!” one of the sibs wrote to me.
“We couldn’t have done it without you!”

That would have been a lovely end to the story. But it isn’t.

Homecoming
When I came home, my daughter announced that she had gotten a new job and, you guessed it, had to move.

“Can you come help me?” she wanted to know.

So a week after downsizing in Massachusetts I was driving down to pack up my daughter in Los Angeles. I arrived on Tuesday. We packed everything in her 1BR/1BA apartment on Wednesday, moved on Thursday, started unpacking on Friday and had her new apartment set up by Saturday.

On Sunday, I arrived home, and found the shipment of the things my husband had sent from his mother’s house.

“Where are we going to put all of this?” I asked him.

Now I was in the position of having to let go of a couple of my favorite pieces of “brown” furniture. The beloved farm cabinet from my father’s home in northern Sweden, and my husband’s beautifully worn slant-front desk from New England would have to find somewhere else to live.

Wrap Up
Today, almost everything is where it should be. My mother-in-law’s house is in contract to be sold.

My daughter is enjoying her new job and her new digs.

And the cabinet and desk we don’t have room for are sitting in the middle of my living room. I’m just not quite ready to let them go.

Clients are always saying it to me, but now I really understand what they mean. It is different when it’s yours. And even though I’m a Senior Move Manager – that’s not any different for me.